This morning my kids and I gave a fellow photographer a ride up to Old Car City.  We had met up there the day before and she decided to stay the night with another friend and we gave her a ride back up there.  Since it is about a 45 minute drive, my kids brought their Samsung tablets with them in the car for a little entertainment.  When we arrived, we went in and spoke to Dean, the owner, and our friend went on her way to start shooting images.  Then something magical happened, my boys, who are 8, wanted to go take picture too.  So they grabbed their tablets from the car and I grabbed my camera and we spent about an hour walking through the front area of Old Car City.  With the exception of the blood sucking bugs so common in our area, it was a great walk and a great way to introduce the boys to some of the photography that I have been doing.  I think they even learned a little too.  We discussed portrait versus landscape camera orientation.  I was blown away by some of their images.  There is nothing like the mind and eye of a child that has yet to be corrupted by preconceptions, stereotypes, and social influence.  We came home and uploaded their images to the computer and they each selected a few images to post process and then I walked them through basic edits in photoshop and NIK.  I would move the sliders etc and have them tell me where to stop.  I think it is time to introduce them photography.  Not sure if I should start with a dslr on automatic for awhile or if we should start with a couple of point and shoots.  I am leaning towards dslr’s since I have several collecting dust.  I almost don’t want to teach them anything about the “rules” of photography, other than they should often be broken.  I will have to teach the mechanics though.  Below you will find their images edited to what they wanted.

Not bad for eight year old boys with a little tablet. 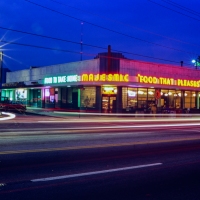